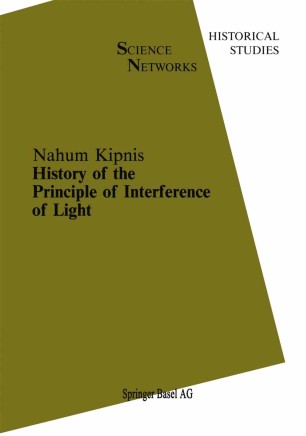 History of the Principle of Interference of Light

The controversy between the wave theory and the emission theory of light early in the nineteenth century has been a subject of numerous studies. Yet many is­ sues remain unclear, in particular, the reasons for rejecting Young's theory of light. It appears that further progress in the field requires a better grasp of the overall situation in optics and related subjects at the time and a more thorough study of every factor suggested to be of importance for the dispute. This book is intended to be a step in this direction. It examines the impact of the concept of interference of light on the development of the early nineteenth­ century optics in general, and the theory of light, in particular. This is not a his­ tory of the wave theory of light, nor is it a history of the debate on the nature of light in general: it covers only that part of the controversy which involved the concept of interference. Although the book deals with a number of scientists, scientific institutions, and journals, its main character is a scientific concept, the principle of interference. While discussing the reasons for accepting or rejecting this concept I have primarily focused on scientific factors, although in some cases the human factor is examined as well. The book is a revised Ph. D. dissertation (University of Minnesota, 1984) writ­ ten under Alan E. Shapiro.