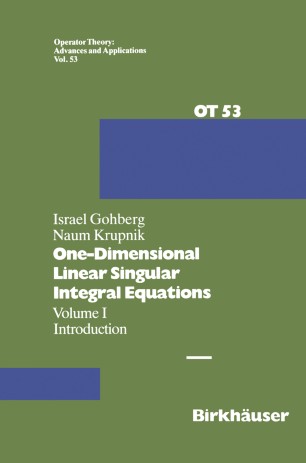 This book is an introduction to the theory of linear one-dimensional singular integral equations. It is essentually a graduate textbook. Singular integral equations have attracted more and more attention, because, on one hand, this class of equations appears in many applications and, on the other, it is one of a few classes of equations which can be solved in explicit form. In this book material of the monograph [2] of the authors on one-dimensional singular integral operators is widely used. This monograph appeared in 1973 in Russian and later in German translation [3]. In the final text version the authors included many addenda and changes which have in essence changed character, structure and contents of the book and have, in our opinion, made it more suitable for a wider range of readers. Only the case of singular integral operators with continuous coefficients on a closed contour is considered herein. The case of discontinuous coefficients and more general contours will be considered in the second volume. We are grateful to the editor Professor G. Heinig of the volume and to the translators Dr. B. Luderer and Dr. S. Roch, and to G. Lillack, who did the typing of the manuscript, for the work they have done on this volume.