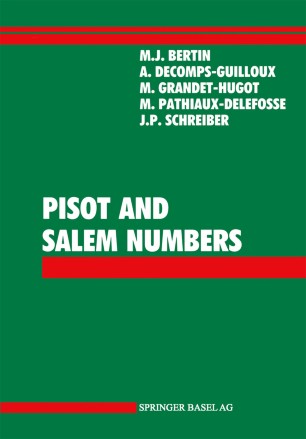 the attention of The publication of Charles Pisot's thesis in 1938 brought to the mathematical community those marvelous numbers now known as the Pisot numbers (or the Pisot-Vijayaraghavan numbers). Although these numbers had been discovered earlier by A. Thue and then by G. H. Hardy, it was Pisot's result in that paper of 1938 that provided the link to harmonic analysis, as discovered by Raphael Salem and described in a series of papers in the 1940s. In one of these papers, Salem introduced the related class of numbers, now universally known as the Salem numbers. These two sets of algebraic numbers are distinguished by some striking arith­ metic properties that account for their appearance in many diverse areas of mathematics: harmonic analysis, ergodic theory, dynamical systems and alge­ braic groups. Until now, the best known and most accessible introduction to these num­ bers has been the beautiful little monograph of Salem, Algebraic Numbers and Fourier Analysis, first published in 1963. Since the publication of Salem's book, however, there has been much progress in the study of these numbers. Pisot had long expressed the desire to publish an up-to-date account of this work, but his death in 1984 left this task unfulfilled.