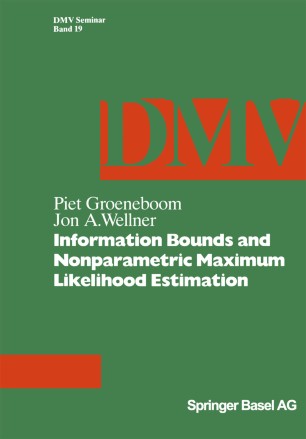 This book contains the lecture notes for a DMV course presented by the authors at Gunzburg, Germany, in September, 1990. In the course we sketched the theory of information bounds for non parametric and semiparametric models, and developed the theory of non parametric maximum likelihood estimation in several particular inverse problems: interval censoring and deconvolution models. Part I, based on Jon Wellner's lectures, gives a brief sketch of information lower bound theory: Hajek's convolution theorem and extensions, useful minimax bounds for parametric problems due to Ibragimov and Has'minskii, and a recent result characterizing differentiable functionals due to van der Vaart (1991). The differentiability theorem is illustrated with the examples of interval censoring and deconvolution (which are pursued from the estimation perspective in part II). The differentiability theorem gives a way of clearly distinguishing situations in which 1 2 the parameter of interest can be estimated at rate n / and situations in which this is not the case. However it says nothing about which rates to expect when the functional is not differentiable. Even the casual reader will notice that several models are introduced, but not pursued in any detail; many problems remain. Part II, based on Piet Groeneboom's lectures, focuses on non parametric maximum likelihood estimates (NPMLE's) for certain inverse problems. The first chapter deals with the interval censoring problem.