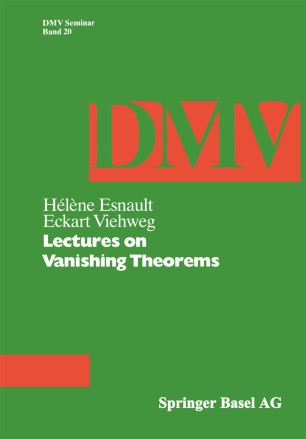 Introduction M. Kodaira's vanishing theorem, saying that the inverse of an ample invert­ ible sheaf on a projective complex manifold X has no cohomology below the dimension of X and its generalization, due to Y. Akizuki and S. Nakano, have been proven originally by methods from differential geometry ([39J and [1]). Even if, due to J.P. Serre's GAGA-theorems [56J and base change for field extensions the algebraic analogue was obtained for projective manifolds over a field k of characteristic p = 0, for a long time no algebraic proof was known and no generalization to p > 0, except for certain lower dimensional manifolds. Worse, counterexamples due to M. Raynaud [52J showed that in characteristic p > 0 some additional assumptions were needed. This was the state of the art until P. Deligne and 1. Illusie [12J proved the degeneration of the Hodge to de Rham spectral sequence for projective manifolds X defined over a field k of characteristic p > 0 and liftable to the second Witt vectors W2(k). Standard degeneration arguments allow to deduce the degeneration of the Hodge to de Rham spectral sequence in characteristic zero, as well, a re­ sult which again could only be obtained by analytic and differential geometric methods beforehand. As a corollary of their methods M. Raynaud (loc. cit.) gave an easy proof of Kodaira vanishing in all characteristics, provided that X lifts to W2(k).