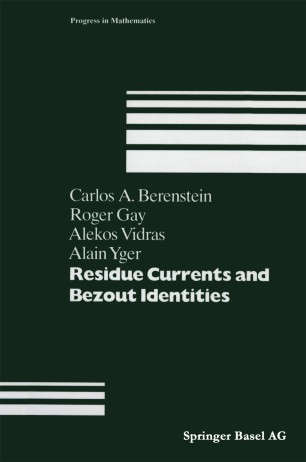 Part of the Progress in Mathematics book series (PM, volume 114)

A very primitive form of this monograph has existed for about two and a half years in the form of handwritten notes of a course that Alain Y ger gave at the University of Maryland. The objective, all along, has been to present a coherent picture of the almost mysterious role that analytic methods and, in particular, multidimensional residues, have recently played in obtaining effective estimates for problems in commutative algebra [71;5]* Our original interest in the subject rested on the fact that the study of many questions in harmonic analysis, like finding all distribution solutions (or finding out whether there are any) to a system of linear partial differential equa­ tions with constant coefficients (or, more generally, convolution equations) in ]R. n, can be translated into interpolation problems in spaces of entire functions with growth conditions. This idea, which one can trace back to Euler, is the basis of Ehrenpreis's Fundamental Principle for partial differential equations [37;5], [56;5], and has been explicitly stated, for convolution equations, in the work of Berenstein and Taylor [9;5] (we refer to the survey [8;5] for complete references. ) One important point in [9;5] was the use of the Jacobi interpo­ lation formula, but otherwise, the representation of solutions obtained in that paper were not explicit because of the use of a-methods to prove interpolation results.

"What an interesting idea! Dealing with residues from the point of view of complex variable theory! We thought that that was all over, after the advent of the Grothendieck hordes. But here we find some brave souls that reassert the primacy of analysis over abstract nonsense! Congratulations!"
- The Bulletin of Mathematical Books
Buy options