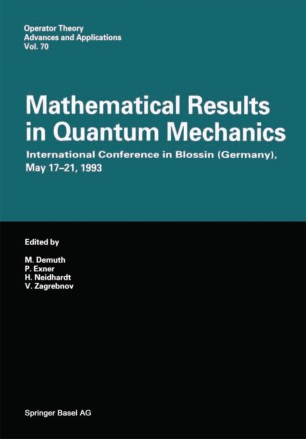 The last decades have demonstrated that quantum mechanics is an inexhaustible source of inspiration for contemporary mathematical physics. Of course, it seems to be hardly surprising if one casts a glance toward the history of the subject; recall the pioneering works of von Neumann, Weyl, Kato and their followers which pushed forward some of the classical mathematical disciplines: functional analysis, differential equations, group theory, etc. On the other hand, the evident powerful feedback changed the face of the "naive" quantum physics. It created a contem­ porary quantum mechanics, the mathematical problems of which now constitute the backbone of mathematical physics. The mathematical and physical aspects of these problems cannot be separated, even if one may not share the opinion of Hilbert who rigorously denied differences between pure and applied mathemat­ ics, and the fruitful oscilllation between the two creates a powerful stimulus for development of mathematical physics. The International Conference on Mathematical Results in Quantum Mechan­ ics, held in Blossin (near Berlin), May 17-21, 1993, was the fifth in the series of meetings started in Dubna (in the former USSR) in 1987, which were dedicated to mathematical problems of quantum mechanics. A primary motivation of any meeting is certainly to facilitate an exchange of ideas, but there also other goals. The first meeting and those that followed (Dubna, 1988; Dubna, 1989; Liblice (in the Czech Republic), 1990) were aimed, in particular, at paving ways to East-West contacts.