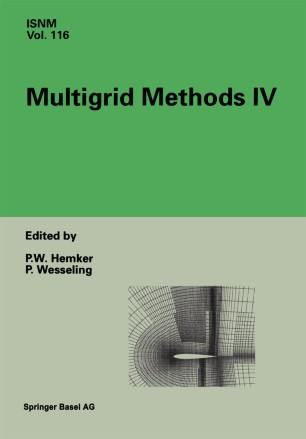 This volume contains a selection from the papers presented at the Fourth European Multigrid Conference, held in Amsterdam, July 6-9,1993. There were 78 registered participants from 14 different countries, and 56 presentations were given. The preceding conferences in this series were held in Cologne (1981, 1985) and in Bonn (1990). Also at the other side of the Atlantic special multigrid conferences are held regularly, at intervals of two years, always in Copper Mountain, Colorado, US. The Sixth Copper Mountain Conference on Multigrid Methods took place in April, 1993. Circumstances prevented us from putting a larger time interval between the Copper and Amsterdam meetings. The next European meeting is planned in 1996, a year later than the next Copper Meeting. When the first multigrid conference was held in 1981 there was no doubt about the usefulness of a conference dedicated specially to multigrid, because multigrid was a new and relatively unexplored subject, still in a pioneering stage, and pursued by specialists. The past twenty years have shown a rapid growth in theoretical understanding, useful applications and widespread acceptance of multi­ grid in the applied disciplines. Hence, one might ask whether there is still a need today for conferences specially dedicated to multigrid. The general consensus is that the answer is affirmative. New issues have arisen that are best addressed or need also be addressed from a special multigrid point of view.