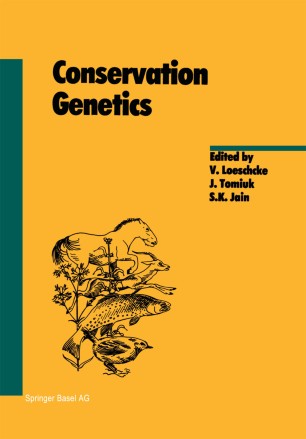 It follows naturally from the widely accepted Darwinian dictum that failures of populations or of species to adapt and to evolve under changing environments will result in their extinction. Population geneti­ cists have proclaimed a centerstage role in developing conservation biology theory and applications. However, we must critically reexamine what we know and how we can make rational contributions. We ask: Is genetic variation really important for the persistence of species? Has any species become extinct because it ran out of genetic variation or because of inbreeding depression? Are demographic and environmental stochas­ ticity by far more important for the fate of a population or species than genetic stochasticity (genetic drift and inbreeding)? Is there more to genetics than being a tool for assessing reproductive units and migration rates? Does conventional wisdom on inbreeding and "magic numbers" or rules of thumb on critical effective population sizes (MVP estimators) reflect any useful guidelines in conservation biology? What messages or guidelines from genetics can we reliably provide to those that work with conservation in practice? Is empirical work on numerous threatened habitats and taxa gathering population genetic information that we can use to test these guidelines? These and other questions were raised in the invitation to a symposium on conservation genetics held in May 1993 in pleasant surroundings at an old manor house in southern Jutland, Denmark.