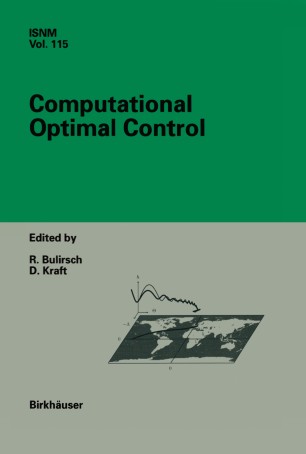 Resources should be used sparingly both from a point of view of economy and eco­ logy. Thus in controlling industrial, economical and social processes, optimization is the tool of choice. In this area of applied numerical analysis, the INTERNATIONAL FEDERATION OF AUTOMATIC CONTROL (IFAC) acts as a link between research groups in universities, national research laboratories and industry. For this pur­ pose, the technical committee Mathematics of Control of IFAC organizes biennial conferences with the objective of bringing together experts to exchange ideas, ex­ periences and future developments in control applications of optimization. There should be a genuine feedback loop between mathematicians, computer scientists, engineers and software developers. This loop should include the design, application and implementation of algorithms. The contributions of industrial practitioners are especially important. These proceedings contain selected papers from a workshop on CONTROL Ap­ PLICATIONS OF OPTIMIZATION, which took place at the Fachhochschule Miinchen in September 1992. The workshop was the ninth in a series of very successful bien­ nial meetings, starting with the Joint Automatic Control Conference in Denver in 1978 and followed by conferences in London, Oberpfaffenhofen, San Francisco, Ca­ pri, Tbilisi and Paris. The workshop was attended by ninety researchers from four continents. This volume represents the state of the art in the field, with emphasis on progress made since the publication of the proceedings of the Capri meeting, edited by G. di Pillo under the title 'Control Applications of Optimization and Nonlinear Programming'.