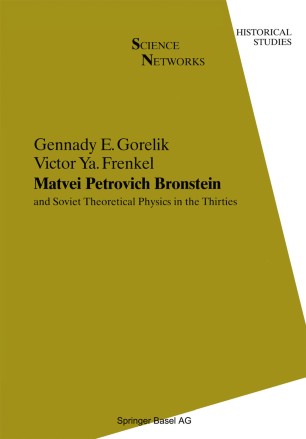 Matvei Petrovich Bronstein and Soviet Theoretical Physics in the Thirties

The true history of physics can only be read in the life stories of those who made its progress possible. Matvei Bronstein was one of those for whom the vast territory of theoretical physics was as familiar as his own home: he worked in cosmology, nuclear physics, gravitation, semiconductors, atmospheric physics, quantum electrodynamics, astro­ physics and the relativistic quantum theory. Everyone who knew him was struck by his wide knowledge, far beyond the limits of his trade. This partly explains why his life was closely intertwined with the social, historical and scientific context of his time. One might doubt that during his short life Bronstein could have made truly weighty contributions to science and have become, in a sense, a symbol ofhis time. Unlike mathematicians and poets, physicists reach the peak oftheir careers after the age of thirty. His thirty years of life, however, proved enough to secure him a place in theGreaterSovietEncyclopedia. In 1967, in describing the first generation of physicists educated after the 1917 revolution, Igor Tamm referred to Bronstein as "an exceptionally brilliant and promising" theoretician [268].