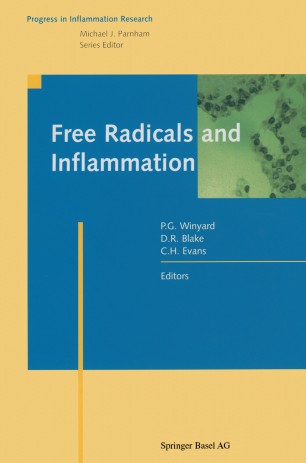 As in so many fields of scientific endeavour following the molecular biology revo­ lution, our knowledge of the role of radicals not only in pathological states, but in basic physiology has developed exponentially. Indeed, our evolving concepts have, like so many political parties, been forced into dramatic "V-turns" and contortions. Within our working lives, we have had to debate whether radicals made any con­ tribution to any pathology, whilst now it is difficult not to entertain the view that every physiological process is pivotally controlled by exquisitely sensitive radical reactions. Inflammation is, of course, an example of pathology evolving from physiology, and in this book we have called upon both scientists and clinicians who have research interests in the complex switching mechanisms that sustain these transi­ tions. The book as a whole explores, from a physiological standpoint, how deter­ ministic radical systems sensitive to their initial conditions can interdigitate, iterate and feed back to control diverse cellular processes that create the inflammatory response. Whilst systems such as these to a mathematician would provide the basis for a chaotic response, one is forced to marvel how, for all stages of an inflammatory reaction, this system appears exquisitely controlled, making therapeutic manipula­ tion both possible and, to some extent, predictable.