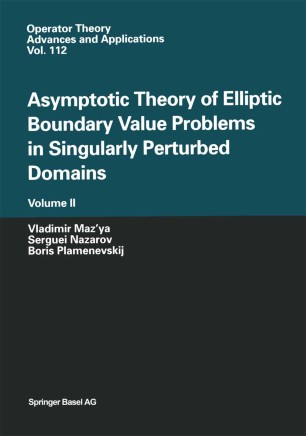 For the first time in the mathematical literature this two-volume work introduces a unified and general approach to the asymptotic analysis of elliptic boundary value problems in singularly perturbed domains. While the first volume is devoted to perturbations of the boundary near isolated singular points, this second volume treats singularities of the boundary in higher dimensions as well as nonlocal perturbations.
At the core of this book are solutions of elliptic boundary value problems by asymptotic expansion in powers of a small parameter that characterizes the perturbation of the domain. In particular, it treats the important special cases of  thin domains, domains with small cavities, inclusions or ligaments, rounded corners and edges, and problems with rapid oscillations of the boundary or the coefficients of the differential operator. The methods presented here capitalize on the theory of elliptic boundary value problems with nonsmooth boundary that has been developed in the past thirty years.
Moreover, a study on the homogenization of differential and difference equations on periodic grids and lattices is given. Much attention is paid to concrete problems in mathematical physics, particularly elasticity theory and electrostatics.
To a large extent the book is based on the authors’ work and has no significant overlap with other books on the theory of elliptic boundary value problems.