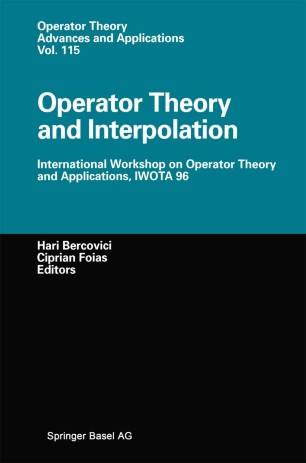 Systems and control theories use sophisticated operator theoretical methods. They also provide new ideas and problems in operator theory. As a consequence, the biannual MTNS (Mathematical Theory of Networks and Systems) conference is attended by many operator theorists. At the initiative of J.W. Helton and I. Gohberg, an International Workshop on Operator Theory and Applications (IWOTA) has been organized since the early 80s, as a satellite of MTNS. The articles in this volume originated from the IWOTA conference held at Indiana University, Bloomington, in June 1996. They represent most of the areas that were discussed at the workshop with some emphasis on modern interpolation theory, a topic which has seen much progress in recent years. The contributions were, as usual, subject to a thorough refereeing process and will bring the reader to the forefront of current research in this area.