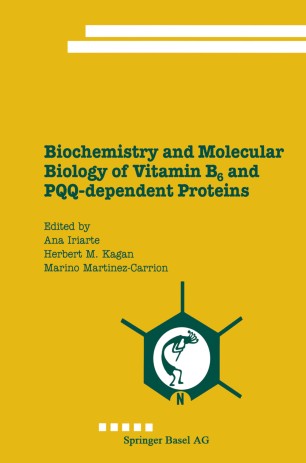 Biochemistry and Molecular Biology of Vitamin B6 and PQQ-dependent Proteins

Since the first international meeting on Vitamin B6 involvement in catalysis took place in 1962, there have been periodic meetings every three or four years. In 1990, scientists studying another cofactor, PQQ, which had already attracted the scientific community's interest for its possible involvement in amino acid decarboxylation and reactions involving amino groups, joined forces with those investigating pyridoxal phosphate-dependent enzymes. Since then, the international PQQ/quinoproteins meetings have been held jointly. In the years following the original meeting 37 years ago in Rome, Italy, the scientific gatherings have taken place in Moscow, Russia (1966); Nagoya, Japan (1967); Leningrad (St. Petersburg), Russia (1974); Toronto, Canada (1979); Athens, Greece (1983); Turku, Finland (1987); Osaka, Japan (1990); and Capri, Italy (1996). For the first time in the history of these symposia, the international meeting was held in the United States, from October 31 through November 5, 1999, in Santa Fe, New Mexico. The scientific program focus shifted significantly beyond the original emphasis on catalysis to aspects such as cellular and genetic regulation of events involving proteins that require pyridoxal phosphate or quinoproteins. The growing awareness of the involvement of these proteins in biotechnology processes and fundamental physiological events, as well as their implication in diseases, was also represented, with emphasis on the molecular basis of these events. The meeting was symposium S278, sponsored by the International Union of Biochemistry and Molecular Biology (IUBMB).