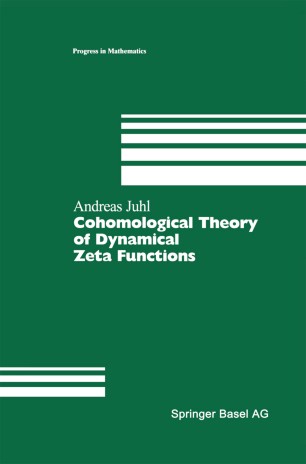 Part of the Progress in Mathematics book series (PM, volume 194)

Dynamical zeta functions are associated to dynamical systems with a countable set of periodic orbits. The dynamical zeta functions of the geodesic flow of lo­ cally symmetric spaces of rank one are known also as the generalized Selberg zeta functions. The present book is concerned with these zeta functions from a cohomological point of view. Originally, the Selberg zeta function appeared in the spectral theory of automorphic forms and were suggested by an analogy between Weil's explicit formula for the Riemann zeta function and Selberg's trace formula ([261]). The purpose of the cohomological theory is to understand the analytical properties of the zeta functions on the basis of suitable analogs of the Lefschetz fixed point formula in which periodic orbits of the geodesic flow take the place of fixed points. This approach is parallel to Weil's idea to analyze the zeta functions of pro­ jective algebraic varieties over finite fields on the basis of suitable versions of the Lefschetz fixed point formula. The Lefschetz formula formalism shows that the divisors of the rational Hassc-Wcil zeta functions are determined by the spectra of Frobenius operators on l-adic cohomology.