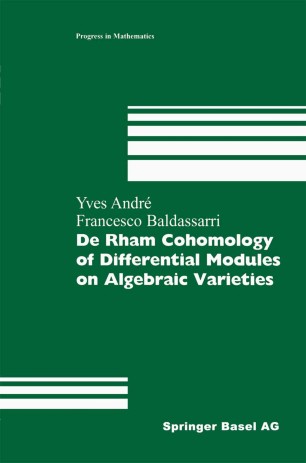 Part of the Progress in Mathematics book series (PM, volume 189)

This is a study of algebraic differential modules in several variables, and of some of their relations with analytic differential modules. Let us explain its source. The idea of computing the cohomology of a manifold, in particular its Betti numbers, by means of differential forms goes back to E. Cartan and G. De Rham. In the case of a smooth complex algebraic variety X, there are three variants: i) using the De Rham complex of algebraic differential forms on X, ii) using the De Rham complex of holomorphic differential forms on the analytic an manifold X underlying X, iii) using the De Rham complex of Coo complex differential forms on the differ­ entiable manifold Xdlf underlying Xan. These variants tum out to be equivalent. Namely, one has canonical isomorphisms of hypercohomology: While the second isomorphism is a simple sheaf-theoretic consequence of the Poincare lemma, which identifies both vector spaces with the complex cohomology H (XtoP, C) of the topological space underlying X, the first isomorphism is a deeper result of A. Grothendieck, which shows in particular that the Betti numbers can be computed algebraically. This result has been generalized by P. Deligne to the case of nonconstant coeffi­ cients: for any algebraic vector bundle .M on X endowed with an integrable regular connection, one has canonical isomorphisms The notion of regular connection is a higher dimensional generalization of the classical notion of fuchsian differential equations (only regular singularities).