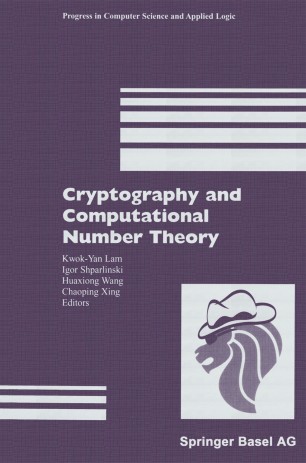 This volume contains the refereed proceedings of the Workshop on Cryptography and Computational Number Theory, CCNT'99, which has been held in Singapore during the week of November 22-26, 1999. The workshop was organized by the Centre for Systems Security of the Na­ tional University of Singapore. We gratefully acknowledge the financial support from the Singapore National Science and Technology Board under the grant num­ ber RP960668/M. The idea for this workshop grew out of the recognition of the recent, rapid development in various areas of cryptography and computational number the­ ory. The event followed the concept of the research programs at such well-known research institutions as the Newton Institute (UK), Oberwolfach and Dagstuhl (Germany), and Luminy (France). Accordingly, there were only invited lectures at the workshop with plenty of time for informal discussions. It was hoped and successfully achieved that the meeting would encourage and stimulate further research in information and computer security as well as in the design and implementation of number theoretic cryptosystems and other related areas. Another goal of the meeting was to stimulate collaboration and more active interaction between mathematicians, computer scientists, practical cryptographers and engineers in academia, industry and government.