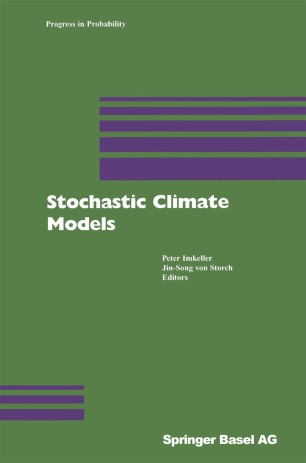 Part of the Progress in Probability book series (PRPR, volume 49)

The proceedings of the summer 1999 Chorin workshop on stochastic climate models captures well the spirit of enthusiasm of the workshop participants engaged in research in this exciting field. It is amazing that nearly 25 years after the formal theory of natural climate variability generated by quasi-white-noise weather forcing was developed, and almost 35 years after J . M. Mitchell first suggested this mechanism as the origin of sea-surf ace-temperature fluctuations and climate variability, there have arisen so many fresh perspectives and new applications of the theory. The workshop has succeeded admirably in high­ lighting these new aspects while clarifying the position of stochastic climate modelling within the general framework of climate research and mathematical modelling. The organizers can be congratulated in bringing together leading researchers covering a wide range of scientific expertise, from mathematicians concerned with the derivation of stochastic models from first principles, to app­ lied climate modellers trying to understand the dynamics of the complex climate system. Following the first burst of stochastic modelling papers in the decade from the mid-seventies to the mid-eighties, in which the viability of the concept was demonstrated using relatively simple conceptual models, there was a lull of work in this field. One awaited the development of more sophisticated climate models with which one could carry out realistic quantitative analyses of the implications of stochastic forcing for the global climate system. Now that these models have become widely available, it is natural that one is witnessing a resurgence of stochastic modelling investigations.