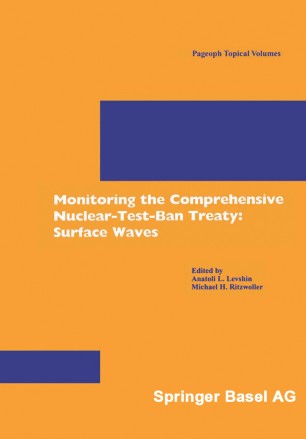 On September 1996, the United Nations General Assembly adopted the Comprehensive Nuclear-Test-Ban Treaty (CTBT), prohibiting nuclear explosions worldwide, in all environments. The treaty calls for a global verification system, including a network of 321 monitoring stations distributed around the globe, a data communications network, an international data center (IDC), and on-site inspections to verify compliance. Seismic methods play the lead role in monitoring the CTBT. This volume concentrates on the measurement and use of surface waves in monitoring the CTBT. Surface waves have three principal applications in CTBT monitoring: to help discriminate nuclear explosions from other sources of seismic energy, to provide mathematical characterizations of the seismic energy that emanates from seismic sources, and to be used as data in inversion for the seismic velocity structure of the crust and uppermost mantle for locating small seismic events regionally. The papers in this volume fall into two general categories: the development and/or application of methods to summarize information in surface waves, and the use of these summaries to advance the art of surface-wave identification, measurement, and source characterization. These papers cut across essentially all of the major applications of surface waves to monitoring the CTBT. This volume therefore provides a general introduction to the state of research in this area and should be useful as a guide for further exploration.