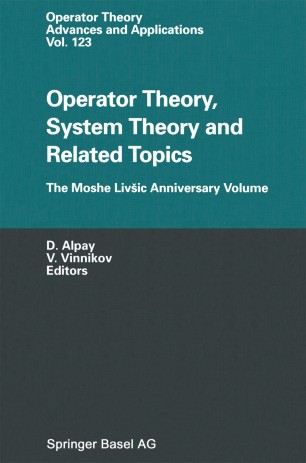 This volume presents the refereed proceedings of the Conference in Operator The­ ory in Honour of Moshe Livsic 80th Birthday, held June 29 to July 4, 1997, at the Ben-Gurion University of the Negev (Beer-Sheva, Israel) and at the Weizmann In­ stitute of Science (Rehovot, Israel). The volume contains papers in operator theory and its applications (understood in a very wide sense), many of them reflecting, 1 directly or indirectly, a profound impact of the work of Moshe Livsic. Moshe (Mikhail Samuilovich) Livsic was born on July 4, 1917, in the small town of Pokotilova near Uman, in the province of Kiev in the Ukraine; his family moved to Odessa when he was four years old. In 1933 he enrolled in the Department of Physics and Mathematics at the Odessa State University, where he became a student of M. G. Krein and an active participant in Krein's seminar - one of the centres where the ideas and methods of functional analysis and operator theory were being developed. Besides M. G. Krein, M. S. Livsic was strongly influenced B. Va. Levin, an outstanding specialist in the theory of analytic functions. A by deep understanding of operator theory as well as function theory and a penetrating search of connections between the two, were to become one of the landmarks of M. S. Livsic's work. M. S. Livsic defended his Ph. D.