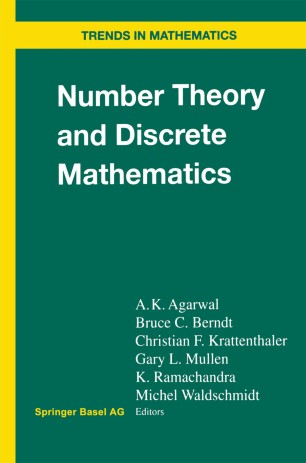 To mark the World Mathematical Year 2000 an International Conference on Number Theory and Discrete Mathematics in honour of the legendary Indian Mathematician Srinivasa Ramanuj~ was held at the centre for Advanced study in Mathematics, Panjab University, Chandigarh, India during October 2-6, 2000. This volume contains the proceedings of that conference. In all there were 82 participants including 14 overseas participants from Austria, France, Hungary, Italy, Japan, Korea, Singapore and the USA. The conference was inaugurated by Prof. K. N. Pathak, Hon. Vice-Chancellor, Panjab University, Chandigarh on October 2, 2000. Prof. Bruce C. Berndt of the University of Illinois, Urbana­ Chaimpaign, USA delivered the key note address entitled "The Life, Notebooks and Mathematical Contributions of Srinivasa Ramanujan". He described Ramanujan--as one of this century's most influential Mathematicians. Quoting Mark K. ac, Prof. George E. Andrews of the Pennsylvania State University, USA, in his message for the conference, described Ramanujan as a "magical genius". During the 5-day deliberations invited speakers gave talks on various topics in number theory and discrete mathematics. We mention here a few of them just as a sampling: • M. Waldschmidt, in his article, provides a very nice introduction to the topic of multiple poly logarithms and their special values. • C.