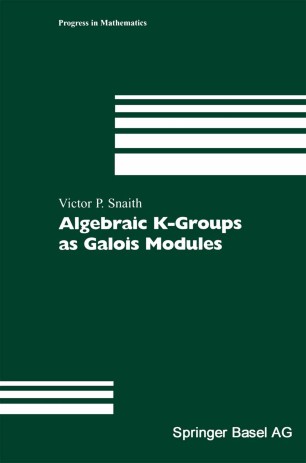 Part of the Progress in Mathematics book series (PM, volume 206)

This volume began as the last part of a one-term graduate course given at the Fields Institute for Research in the Mathematical Sciences in the Autumn of 1993. The course was one of four associated with the 1993-94 Fields Institute programme, which I helped to organise, entitled "Artin L-functions". Published as [132]' the final chapter of the course introduced a manner in which to construct class-group­ valued invariants from Galois actions on the algebraic K-groups, in dimensions two and three, of number rings. These invariants were inspired by the analogous Chin­ burg invariants of [34], which correspond to dimensions zero and one. The classical Chinburg invariants measure the Galois structure of classical objects such as units in rings of algebraic integers. However, at the "Galois Module Structure" workshop in February 1994, discussions about my invariant (0,1 (L/ K, 3) in the notation of Chapter 5) after my lecture revealed that a number of other higher-dimensional co­ homological and motivic invariants of a similar nature were beginning to surface in the work of several authors. Encouraged by this trend and convinced that K-theory is the archetypical motivic cohomology theory, I gratefully took the opportunity of collaboration on computing and generalizing these K-theoretic invariants. These generalizations took several forms - local and global, for example - as I followed part of number theory and the prevalent trends in the "Galois Module Structure" arithmetic geometry.