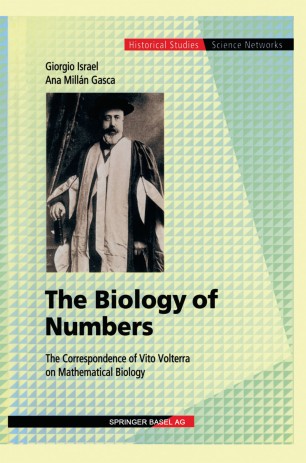 The Biology of Numbers

The Correspondence of Vito Volterra on Mathematical Biology

Foreword The modern developments in mathematical biology took place roughly between 1920 and 1940, a period now referred to as the "Golden Age of Theoretical Biology". The eminent Italian mathematician Vito Volterra played a decisive and widely acknowledged role in these developments. Volterra's interest in the application of mathematics to the non physical sciences, and to biology and economics in particular, dates back to the turn of the century and was expressed in his inaugural address at the University of Rome for the academic year 1900/01 (VOLTERRA 1901). Nevertheless, it was only in the mid-twenties that Volterra entered the field in person, at the instigation of his son in law, Umberto D'Ancona, who had confronted him with the problem of competition among animal species, asking him whether a mathematical treatment was possible. From that time on, until his death in 1940, Volterra produced a huge output of publications on the subject. Volterra's specific project was to transfer the model and the concepts of classical mechanics to biology, constructing a sort of "rational mechanics" and an "analytic mechanics" of biological associations. The new subject was thus to be equipped with a solid experimental or at least empirical basis, also in this case following the tried and tested example of mathematical physics. Although very few specific features of this reductionist programme have actually survived, Volterra's contribution was decisive, as is now universally acknowledged, in en­ couraging fresh studies in the field of mathematical biology.