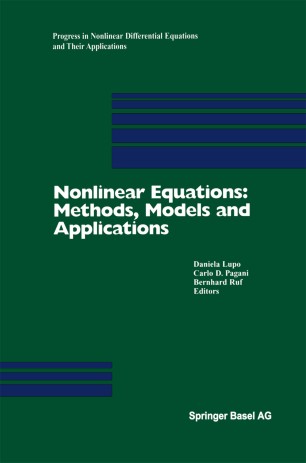 Part of the Progress in Nonlinear Differential Equations and Their Applications book series (PNLDE, volume 54)

This volume contains research articles from the field of Nonlinear Differential Equa­ tions which result from the "Workshop on Nonlinear Analysis and Applications" held in Bergamo on July 9 to 13, 200l. This workshop was the third edition of a meeting which first took place in Campinas in 1996 and was founded in part upon scientific cooperation, already well initiated, between some participants, on specific problems in Nonlinear Analysis, and in part upon the whish to extend such cooperation to other researchers and to other topics. The scientific collaboration between Italy and Brazil is not new; it dates back at least to the thirties, and includes, among others, the name of Luigi Fantappie, just to mention only one of the earliest Italians that developed part of their scien­ tific activity in Brazil. If the first workshop had mainly an informal character, the second, which took place in 1998 again in Campinas, already had the structure and the breath of a true international congress. At this point it was the Italians turn to organize the third meeting. The main purpose of the conference was to provide a forum for the discussion of recent work and modern trends in various fields of Nonlinear Analysis. About 130 researchers coming from 17 countries attended the conference.