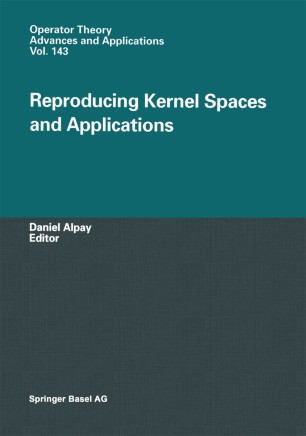 20. Pattern recognition and statistical learning theory (the theory of support vector machines). See [40], [58]. In this last volume we refer in particular to the papers [63] and [64]. Since this topic is maybe less known to the operator theory community we mention that the support vector method is a general approach to function estimation problems. See [63, p. 26]. We note that the above list and the given references are by no way exhaustive. We refer to the first section of the paper of S. Saitoh in the present volume for another (and mainly different) list of topics where reproducing kernel spaces appear. Quite often a given question is best understood in a reproducing kernel Hilbert space (for instance when using Cauchy's formula in the Hardy space H ) 2 and one finds oneself as Mr Jourdain of Moliere' Bourgeois Gentilhomme speaking Prose without knowing it [48, p. 51]: Par ma foil il y a plus de quarante ans que je dis de la prose sans que l j'en susse rien.