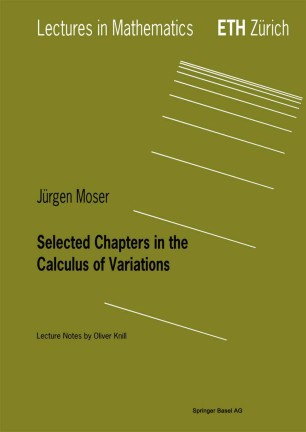 Selected Chapters in the Calculus of Variations

0.1 Introduction These lecture notes describe a new development in the calculus of variations which is called Aubry-Mather-Theory. The starting point for the theoretical physicist Aubry was a model for the descrip­ tion of the motion of electrons in a two-dimensional crystal. Aubry investigated a related discrete variational problem and the corresponding minimal solutions. On the other hand, Mather started with a specific class of area-preserving annulus mappings, the so-called monotone twist maps. These maps appear in mechanics as Poincare maps. Such maps were studied by Birkhoff during the 1920s in several papers. In 1982, Mather succeeded to make essential progress in this field and to prove the existence of a class of closed invariant subsets which are now called Mather sets. His existence theorem is based again on a variational principle. Although these two investigations have different motivations, they are closely re­ lated and have the same mathematical foundation. We will not follow those ap­ proaches but will make a connection to classical results of Jacobi, Legendre, Weier­ strass and others from the 19th century. Therefore in Chapter I, we will put together the results of the classical theory which are the most important for us. The notion of extremal fields will be most relevant. In Chapter II we will investigate variational problems on the 2-dimensional torus. We will look at the corresponding global minimals as well as at the relation be­ tween minimals and extremal fields. In this way, we will be led to Mather sets.