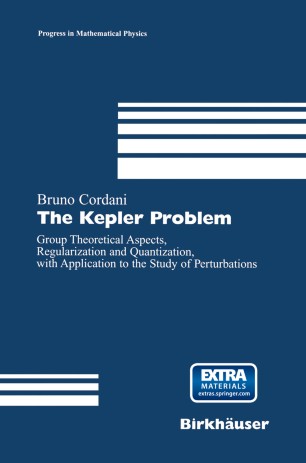 Group Theoretical Aspects, Regularization and Quantization, with Application to the Study of Perturbations

This book contains a comprehensive treatment of the Kepler problem, i.e., the two body problem. It is divided into four parts. In the first part, written at an undergraduate student level, the arguments are presented in an elementary fashion, and the properties of the problem are demonstrated in a purely computational manner. In the second part a unifying point of view, original to the author, is presented which centers the exposition on the intrinsic group-geometrical aspects. This part requires more mathematical background, which the reader will find in the fourth part, in particular, the basic tools of differential geometry and analytical mechanics used in the book. The third part exploits some results of the second part to give a geometrical description of the perturbation theory of the Kepler problem.

Each of the four parts, which are to some extent independent, could itself form the basis for a one-semester course. The accompanying CD contains mainly the Microsoft Windows program KEPLER developed by the author. This program calculates the effects of any perturbation of the Kepler problem and plots the resulting trajectories.

"This is an interesting book, which well organizes the group-geometric aspects of the Kepler problem on which a great number of articles have been published along with the advance of symmetry theory. . . . a nice reference not only for graduate students but also for scientists who are interested in dynamical systems with symmetry." --MathSciNet