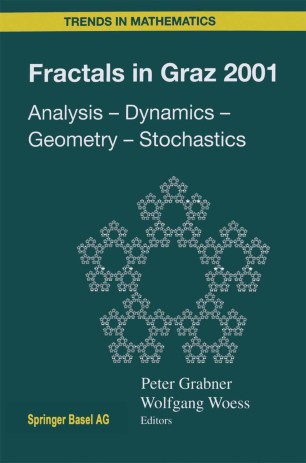 This book contains the proceedings of the conference "Fractals in Graz 2001 - Analysis, Dynamics, Geometry, Stochastics" that was held in the second week of June 2001 at Graz University of Technology, in the capital of Styria, southeastern province of Austria. The scientific committee of the meeting consisted of M. Barlow (Vancouver), R. Strichartz (Ithaca), P. Grabner and W. Woess (both Graz), the latter two being the local organizers and editors of this volume. We made an effort to unite in the conference as well as in the present pro­ ceedings a multitude of different directions of active current work, and to bring together researchers from various countries as well as research fields that all are linked in some way with the modern theory of fractal structures. Although (or because) in Graz there is only a very small group working on fractal structures, consisting of "non-insiders", we hope to have been successful with this program of wide horizons. All papers were written upon explicit invitation by the editors, and we are happy to be able to present this representative panorama of recent work on poten­ tial theory, random walks, spectral theory, fractal groups, dynamic systems, fractal geometry, and more. The papers presented here underwent a refereeing process.