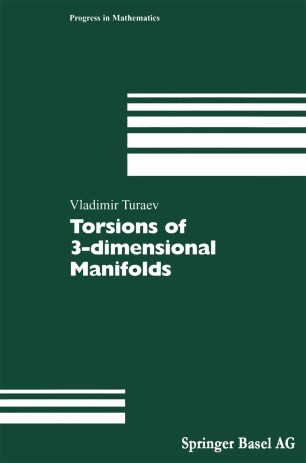 Part of the Progress in Mathematics book series (PM, volume 208)

Three-dimensional topology includes two vast domains: the study of geometric structures on 3-manifolds and the study of topological invariants of 3-manifolds, knots, etc. This book belongs to the second domain. We shall study an invariant called the maximal abelian torsion and denoted T. It is defined for a compact smooth (or piecewise-linear) manifold of any dimension and, more generally, for an arbitrary finite CW-complex X. The torsion T(X) is an element of a certain extension of the group ring Z[Hl(X)]. The torsion T can be naturally considered in the framework of simple homotopy theory. In particular, it is invariant under simple homotopy equivalences and can distinguish homotopy equivalent but non­ homeomorphic CW-spaces and manifolds, for instance, lens spaces. The torsion T can be used also to distinguish orientations and so-called Euler structures. Our interest in the torsion T is due to a particular role which it plays in three-dimensional topology. First of all, it is intimately related to a number of fundamental topological invariants of 3-manifolds. The torsion T(M) of a closed oriented 3-manifold M dominates (determines) the first elementary ideal of 7fl (M) and the Alexander polynomial of 7fl (M). The torsion T(M) is closely related to the cohomology rings of M with coefficients in Z and ZjrZ (r ;::: 2). It is also related to the linking form on Tors Hi (M), to the Massey products in the cohomology of M, and to the Thurston norm on H2(M).