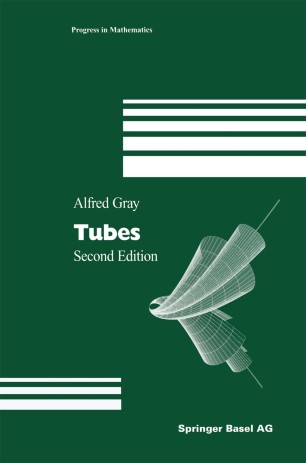 Part of the Progress in Mathematics book series (PM, volume 221)

In July 1998, I received an e-mail from Alfred Gray, telling me: " . . . I am in Bilbao and working on the second edition of Tubes . . . Tentatively, the new features of the book are: 1. Footnotes containing biographical information and portraits 2. A new chapter on mean-value theorems 3. A new appendix on plotting tubes " That September he spent a week in Valencia, participating in a workshop on Differential Geometry and its Applications. Here he gave me a copy of the last version of Tubes. It could be considered a final version. There was only one point that we thought needed to be considered again, namely the possible completion of the material in Section 8. 8 on comparison theorems of surfaces with the now well-known results in arbitrary dimensions. But only one month later the sad and shocking news arrived from Bilbao: Alfred had passed away. I was subsequently charged with the task of preparing the final revision of the book for the publishers, although some special circumstances prevented me from finishing the task earlier. The book appears essentially as Alred Gray left it in September 1998. The only changes I carried out were the addition of Section 8. 9 (representing the discus­ sion we had), the inclusion of some new results on harmonic spaces, the structure of Hopf hypersurfaces in complex projective spaces and the conjecture about the volume of geodesic balls.