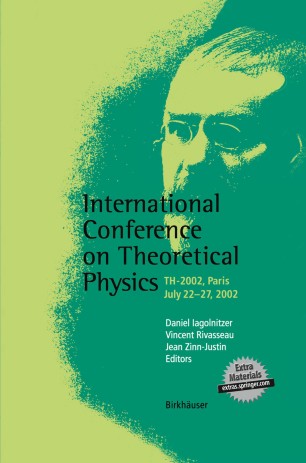 The International Conference on Theoretical Physics, TH-2002, took place in Paris from July 22 to 27 in the Conference Center of the UNESCO, the United Nations Educational Scientific and Cultural Organization, under aegis of the IUPAP, the International Union of Pure and Applied Physics and of the French and Euro­ pean Physical Societies, with a large support of several French, European and international Institutions. International and crossdisciplinary, TH-2002 welcomed around 1200 partic­ ipants representing all domains of modern theoretical physics. The conference offered a high-level scientific program, including 18 plenary lectures, 45 general lectures in thematic sessions and 140 more specialized lectures, partly invited and partly selected among proposals received from participants. Around 500 contribu­ tions were also presented as posters. Plenary lectures as well as general thematic lectures were addressed to a general audience of theoricians, not only to specialists. According to our commitments towards UNESCO and other sponsoring insti­ tutions, TH-2002 attributed more than 200 fellowships, mostly to scientists from developing countries and Eastern Europe, covering registration fees and, for more than half of them, stay expenses with student type accomodation. Special highlights of the conference included • the opening ceremony on July 22, with the participation of Mrs Claudie Haignere, French Minister of Research, and M. Walter Erdelen, General Ad­ joint Director for Sciences at UNESCO. Their opening addresses were espe­ cially appreciated and are reproduced below. This ceremony preceded the first lecture by Professor Cohen-Tannoudji, Physics Nobel prize winner.