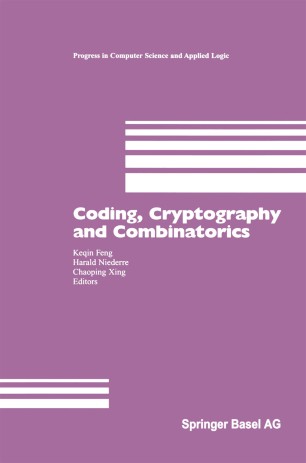 It has long been recognized that there are fascinating connections between cod­ ing theory, cryptology, and combinatorics. Therefore it seemed desirable to us to organize a conference that brings together experts from these three areas for a fruitful exchange of ideas. We decided on a venue in the Huang Shan (Yellow Mountain) region, one of the most scenic areas of China, so as to provide the additional inducement of an attractive location. The conference was planned for June 2003 with the official title Workshop on Coding, Cryptography and Combi­ natorics (CCC 2003). Those who are familiar with events in East Asia in the first half of 2003 can guess what happened in the end, namely the conference had to be cancelled in the interest of the health of the participants. The SARS epidemic posed too serious a threat. At the time of the cancellation, the organization of the conference was at an advanced stage: all invited speakers had been selected and all abstracts of contributed talks had been screened by the program committee. Thus, it was de­ cided to call on all invited speakers and presenters of accepted contributed talks to submit their manuscripts for publication in the present volume. Altogether, 39 submissions were received and subjected to another round of refereeing. After care­ ful scrutiny, 28 papers were accepted for publication.