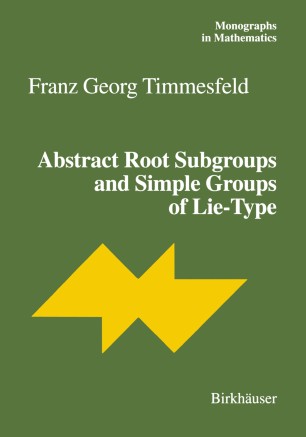 Part of the Monographs in Mathematics book series (MMA, volume 95)

It was already in 1964 [Fis66] when B. Fischer raised the question: Which finite groups can be generated by a conjugacy class D of involutions, the product of any two of which has order 1, 2 or 37 Such a class D he called a class of 3-tmnspositions of G. This question is quite natural, since the class of transpositions of a symmetric group possesses this property. Namely the order of the product (ij)(kl) is 1, 2 or 3 according as {i,j} n {k,l} consists of 2,0 or 1 element. In fact, if I{i,j} n {k,I}1 = 1 and j = k, then (ij)(kl) is the 3-cycle (ijl). After the preliminary papers [Fis66] and [Fis64] he succeeded in [Fis71J, [Fis69] to classify all finite "nearly" simple groups generated by such a class of 3-transpositions, thereby discovering three new finite simple groups called M(22), M(23) and M(24). But even more important than his classification theorem was the fact that he originated a new method in the study of finite groups, which is called "internal geometric analysis" by D. Gorenstein in his book: Finite Simple Groups, an Introduction to their Classification. In fact D. Gorenstein writes that this method can be regarded as second in importance for the classification of finite simple groups only to the local group-theoretic analysis created by J. Thompson.