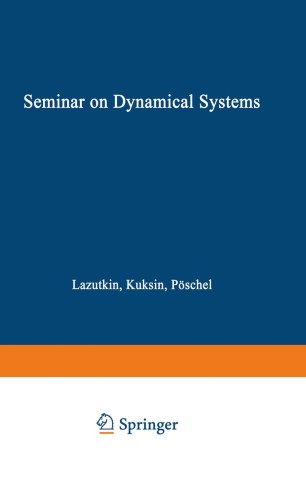 Part of the Progress in Nonlinear Differential Equations and Their Applications book series (PNLDE, volume 12)

The "Dynamical Systems Semester" took place at the Euler International Mathematical Institute in St. Petersburg, Russia, in the autumn of 1991. There were two workshops, October 14-25 and November 18-29, with more than 60 participants giving 70 talks. The titles of all talks are given at the end of this volume. Here we included 22 papers prepared by the authors especially for this volume, while the material of the other talks are published elsewhere. The semester was sponsored by the Soviet Academy of Sciences and UN­ ESCO. Since the new building of the Euler Institute was not ready at that moment, the sessions were held in the old building of the Steklov Mathemati­ cal Institute in the very center of St. Petersburg. Members of the staff of the Euler Institute were doing their best to organize properly the normal processing of the conference-not a simple task at that time because of the complications in the political and economical life in Russia just between the coup d'etat in August and the dismantling of the Soviet Union in December. We are thankful to all of them.