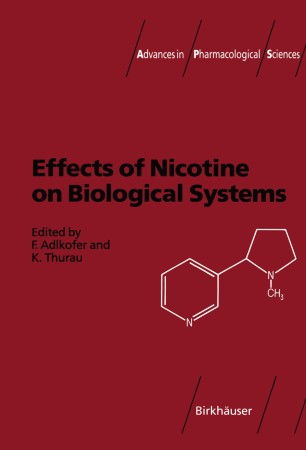 Effects of Nicotine on Biological Systems

As part of its scientific activities, the German Research Council on Smoking and Health regularly provides opportunities for scientists to discuss progress in the field of nicotine research. In this context, the Research Council sponsored a Satellite Symposium in Hamburg, June 28-30, 1990 entitled "Effects of Nicotine on Biological Systems". This meeting was held in conjunction with the XIth International Congress of Pharmacology in Amsterdam and follows the first Satellite Symposium on Nicotine which was convened in Brisbane, Australia in 1987. The aim of these conferences has been to discuss state of the art research on the pharmacology and toxicology of nicotine and its metabolites and to integrate this information to help define nicotinic actions on the central and peripheral nervous system as well as to evaluate health or behavioral effects associated with use of this alkaloid. Furthermore, at this conference, potential therapeutic benefits of nicotine for certain disease states were discussed. Smoking and the health effects of smoking were dealt with only as far as they could not be separated from the effects of nicotine. This volume contains the lectures presented at the symposium and illustrates that knowledge of nicotine has advanced considerably in recent years with regard to mechanisms of its actions. Despite such progress however, it is apparent that a' large number of questions remain unanswered, especially in the light of new insight into cellular and molecular mechanisms which can be affected by nicotine.