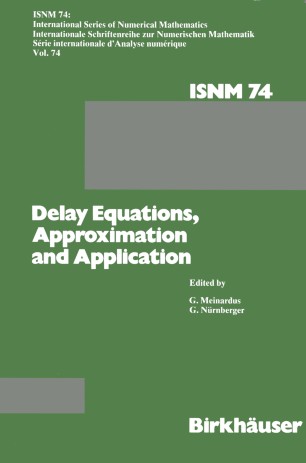 International Symposium at the University of Mannheim, October 8–11, 1984

The international symposium held in October 1984 at the Uni­ versity of Mannheim was the first with the special aim to expose the connection of the Theory of Delay Eauations and Approximation Theory with the emphasis on constructive methods and applications. Although the separate character of both domains is reflected by their historical development, the latest research shows that the numerical treatment of Delay Equations leads to various appro­ ximation and optimization problems. An introductory survey of this circle of problems written by the editors is included at the beginning of the book. Delay Equations have their origin in domains of applications, such as physics, engineering, biology, medicine and economics. They appear in connection with the fundamental problem to analyse a retarded process from the real world, to develop a corresponding mathematical model and to determine the future behavior. Thirty mathematicians attended the conference coming from Germany, West- and Eastern Europe and the United States- more than twenty of them presented a research talk. The lectures about Delay Equations were mainly oriented on the following subjects: single-step, multi-step and spline methods; monotonicity methods for error estimations; asymptotic behavior 10 and periodicity of solutions. The topics of the talks on Approxi­ mation Theory covered different aspects of approximation by poly­ nomials, splines and rational functions and their numerical rea­ lization. Additionally included in the scientific program was a special session on Open Problems, where several suggestions were made for further research concerning both fields.