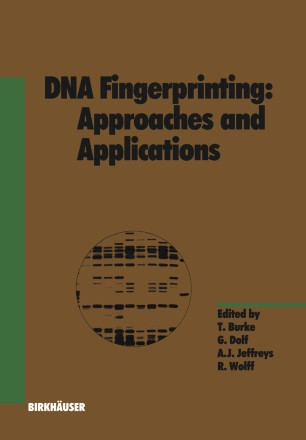 Although DNA fingerprinting is a very young branch of molecular genetics, being barely six years old, its recent impact on science, law and politics has been dramatic. The application of DNA finger­ printing to forensic and legal medicine has guaranteed a high public profile for this technology, and indeed, scarcely a week goes by with­ out the press reporting yet another crime successfully solved by molec­ ular genetics. Less spectacularly, but equally importantly, DNA typing methods are steadily diffusing into an ever wider set of applications and research fields, ranging from medicine through to conservation biology. To date, two DNA fingerprinting workshops have been held in the UK, one in 1988 organised by Terry Burke at the University of Leicester, and the second in 1989 at the University of Nottingham, co-ordinated by David Parkin. In parallel with these workshops, which have provided an important focus for researchers, Bill Amos and Josephine Pemberton in Cambridge have established an informal newsletter "Fingerprint News" which is playing a major role as a forum for DNA fingerprinters. By 1989, it was clear that the field had broadened sufficiently to warrant a full international meeting. As a result, Gaudenz Dolf took on the task of organising the first, of what I hope will be many, International Symposium of DNA Fingerprinting held at Bern during Ist-3rd October 1990. The success of the meeting can be judged from the remarkable attendance, with 270 delegates from no less than 30 countries.