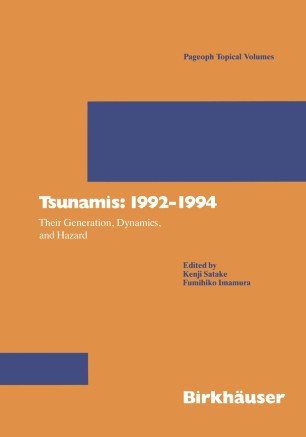 Their Generation, Dynamics, and Hazard

The 1993 Southwest Hokkaido Earthquake of Magnitude 7. 9 (July 12, 22: 17 JST) caused serious tsunami disasters in the southwestern part of Hokkaido, particularly on Okushiri Island (a tiny island off the southwest coast of Hokkaido with a population of about 4,500 at the time of earthquake). Of 230 casualties, including 28 missing, about 200 deaths are attributable to the tsunami. We have conducted detailed field surveys of tsunami disasters to learn lessons from this costly natural experiment for the future prevention of similar tsunami disasters. Our field work was conducted in four surveys totaling 39 days. During the first field survey (July 16 through July 21, 1994), we worked mostly on the estimation of the subsidence of Okushiri Island during the earthquake. Hence, our main work on tsunami disasters initiated from the second field survey (July 31 through Aug. 15, 1994). Several groups have conducted detailed surveys of the distribution of tsunami runup height as measured from the level of sea water (TsUJI et al. , 1 994a, b; MATSUTOMI and SHUTO, 1994; GOTO et al. , 1994). Such a precise runup height distribution is essential for characterizing tsunami, including its overall size. Indeed, the height distribution is the fundamental data for inferring earthquake source parameters through the simulation of tsunami generation (TAKAHASHI et al. , 1994; IMAMURA et al. , 1994; TSUJI et al. , 1994a; SATAKE and TANIOKA 1994; ABE, 1994; TANIOKA et al. , in review).