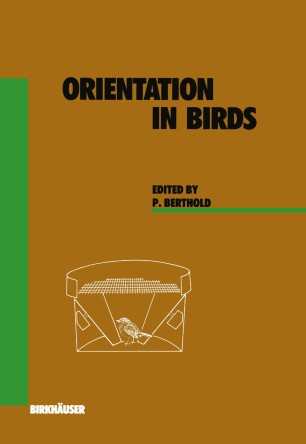 If it is true that science proceeds from a romantic through a scientific to a technological stage, then research on bird orientation is certainly on its move from its first to its second grade, and recent developments in radiotelemetry and satellite tracking of migrating birds might already indicate the advent of the third stage. At this juncture, Orientation in Birds is a timely account. Even though the study of animal migration in general, and bird navigation in particular, has produced a literature of impressive proportions, the threads provided by the plethora of research papers, review articles and symposiums volumes have not yet been knitted into a theoretical fabric. This is partly due to our still incomplete understanding of fundamen­ tal topics in avian navigation. The answer to the most intriguing question of how a bird displaced to "unknown" territory finds its way back home is as obscure now as it was a few decades ago. Whether and how birds solve this problem by using far ranging grid-maps or more local familiar-area maps, as has been proposed off and on, is still a matter of heated debates. These debates frequently center around provocative hypotheses - let alone the question about the physical (topographic, magnetic, infrasonic, olfactory) parameters which might constitute such maps.