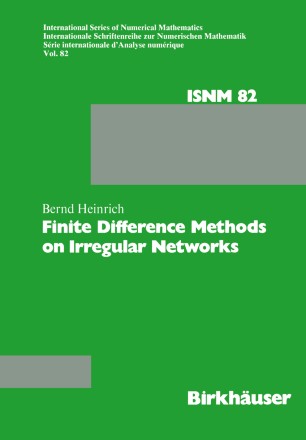 The finite difference and finite element methods are powerful tools for the approximate solution of differential equations governing diverse physical phenomena, and there is extensive literature on these discre­ tization methods. In the last two decades, some extensions of the finite difference method to irregular networks have been described and applied to solving boundary value problems in science and engineering. For instance, "box integration methods" have been widely used in electro­ nics. There are several papers on this topic, but a comprehensive study of these methods does not seem to have been attempted. The purpose of this book is to provide a systematic treatment of a generalized finite difference method on irregular networks for solving numerically elliptic boundary value problems. Thus, several disadvan­ tages of the classical finite difference method can be removed, irregular networks of triangles known from the finite element method can be applied, and advantageous properties of the finite difference approxima­ tions will be obtained. The book is written for advanced undergraduates and graduates in the area of numerical analysis as well as for mathematically inclined workers in engineering and science. In preparing the material for this book, the author has greatly benefited from discussions and collaboration with many colleagues who are concerned with finite difference or (and) finite element methods.