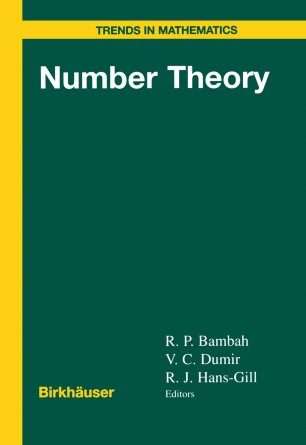 The Indian National Science Academy on the occasion ofthe Golden Jubilee Celebration (Fifty years of India's Independence) decided to publish a number of monographs on the selected fields. The editorial board of INS A invited us to prepare a special monograph in Number Theory. In reponse to this assignment, we invited several eminent Number Theorists to contribute expository/research articles for this monograph on Number Theory. Al­ though some ofthose invited, due to other preoccupations-could not respond positively to our invitation, we did receive fairly encouraging response from many eminent and creative number theorists throughout the world. These articles are presented herewith in a logical order. We are grateful to all those mathematicians who have sent us their articles. We hope that this monograph will have a significant impact on further development in this subject. R. P. Bambah v. C. Dumir R. J. Hans-Gill A Centennial History of the Prime Number Theorem Tom M. Apostol The Prime Number Theorem Among the thousands of discoveries made by mathematicians over the centuries, some stand out as significant landmarks. One of these is the prime number theorem, which describes the asymptotic distribution of prime numbers. It can be stated in various equivalent forms, two of which are: x (I) K(X) '" -I - as x --+ 00, ogx and Pn '" n log n as n --+ 00. (2) In (1), K(X) denotes the number of primes P ::s x for any x > O.