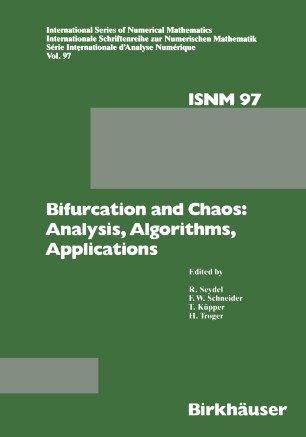 This volume contains the proceedings of a conference held in Wiirzburg, August 20-24, 1990. The theme of the conference was Bifurcation and Chaos: Analysis, Algorithms, Ap­ plications. More than 100 scientists from 21 countries presented 80 contributions. Many of the results of the conference are described in the 49 refereed papers that follow. The conference was sponsored by the Deutsche Forschungsgemeinschaft, and by the Deutscher Akademischer Austauschdienst. We gratefully acknowledge the support from these agen­ cies. The science of nonlinear phenomena is evolving rapidly. Over the last 10 years, the emphasis has been gradually shifting. How trends vary may be seen by comparing these proceedings with previous ones, in particular with the conference held in Dortmund 1986 (proceedings published in ISNM 79). Concerning the range of phenomena, chaos has joined the bifurcation scenarios. As expected, the acceptance of chaos is less emotional among professionals, than it has been in some popular publications. A nalytical methods appear to have reached a state in which basic results of singularities, symmetry groups, or normal forms are everyday experience rather than exciting news. Similarly, numerical algorithms for frequent situations are now well established. Implemented in several packages, such algorithms have become standard means for attacking nonlinear problems. The sophisti­ cation that analytical and numerical methods have reached supports the vigorous trend to more and more applications. Pioneering equations as those named after Duffing, Van der Pol, or Lorenz, are no longer exclusively the state of art.