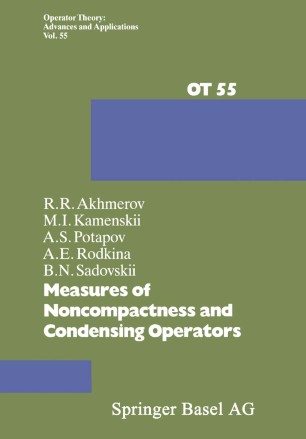 Measures of Noncompactness and Condensing Operators

A condensing (or densifying) operator is a mapping under which the image of any set is in a certain sense more compact than the set itself. The degree of noncompactness of a set is measured by means of functions called measures of noncompactness. The contractive maps and the compact maps [i.e., in this Introduction, the maps that send any bounded set into a relatively compact one; in the main text the term "compact" will be reserved for the operators that, in addition to having this property, are continuous, i.e., in the authors' terminology, for the completely continuous operators] are condensing. For contractive maps one can take as measure of noncompactness the diameter of a set, while for compact maps can take the indicator function of a family of non-relatively com­ pact sets. The operators of the form F( x) = G( x, x), where G is contractive in the first argument and compact in the second, are also condensing with respect to some natural measures of noncompactness. The linear condensing operators are characterized by the fact that almost all of their spectrum is included in a disc of radius smaller than one. The examples given above show that condensing operators are a sufficiently typical phenomenon in various applications of functional analysis, for example, in the theory of differential and integral equations. As is turns out, the condensing operators have properties similar to the compact ones.