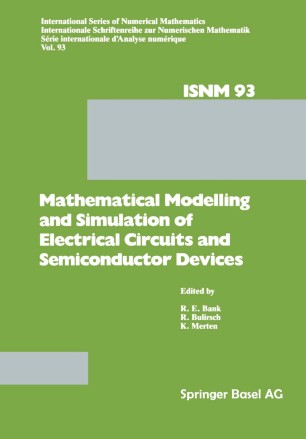 Mathematical Modelling and Simulation of Electrical Circuits and Semiconductor Devices

Proceedings of a Conference held at the Mathematisches Forschungsinstitut, Oberwolfach, October 30 – November 5, 1988

Numerical simulation and modelling of electric circuits and semiconductor devices are of primal interest in today's high technology industries. At the Oberwolfach Conference more than forty scientists from around the world, in­ cluding applied mathematicians and electrical engineers from industry and universities, presented new results in this area of growing importance. The contributions to this conference are presented in these proceedings. They include contributions on special topics of current interest in circuit and device simulation, as well as contributions that present an overview of the field. In the semiconductor area special lectures were given on mixed finite element methods and iterative procedures for the solution of large linear systems. For three dimensional models new discretization procedures including software packages were presented. Con­ nections between semiconductor equations and the Boltzmann equation were shown as well as relations to the quantum transport equation. Other issues discussed in this area include the design of simulation programs for semiconductors, vectorcomputers, and interface problems in several dimensions. Topics discussed in the area of circuit simulation include the index classification of differential-algebraic systems, connections with ill-posed problems, and regularization techniques. Split discretization procedures were given for the efficient calculation of periodic solutions of circuits taking into acount the latency. Homotopy methods and new numerical techniques for differential-algebraic systems were presented, and im­ provements of special numerical methods for standard software packages were sug­ gested. The editors VII Table of Contents Circuit Simulation Merten K.