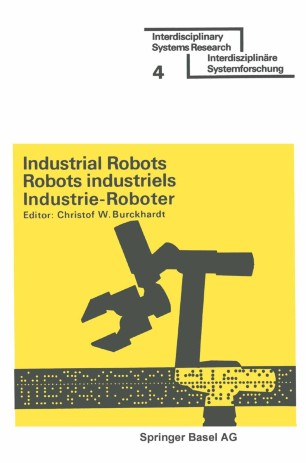 The Industrial Robot-a programmable device capable of executing autonomously a number of manipulations in a production line--opens new perspectives in terms of progress in the mechan­ ization of industrial production. It ought to be able to liberate man from dangerous, unpleasant and monotonous work. Industrial Robots made their first appearance in the USA in 1962 where they were mainly used in the automobile industry. Since then the number of manufacturers has increased substantially and Industrial Robots are currently finding ever widening fields of application. Anyone wishing to learn something about Industrial Robots is somewhat confined to conferences and their proceedings as these are at the moment the best way to keep abreast of developments in this new and complex field. The "Journees de Microtechnique" take place every two years at the Swiss Institute of Technology in Lausanne and treat a different subject of current interest on each occasion. The subject chosen for October 1974 was the Industrial Robot in general. together with its precision engineering aspects. The present proceedings although somewhat heterogenious, provide abrief introduction to this field and record the state of this technique, of a marked interdisciplinary nature, which is in constant and rapid development.