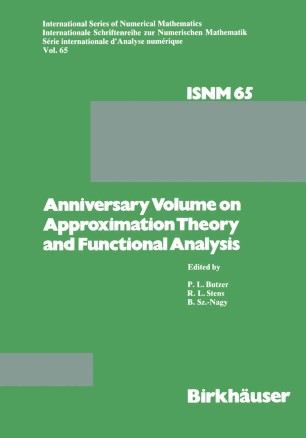 These Proceedings include 42 of the 49 invited conference papers, three papers sub­ mitted subsequently, and a report devoted to new and unsolved problems based on two special problem sessions and as augmented by later communications from the participants. In addition, there are four short accounts that emphasize the personality of the scholars to whom the proceedings are dedicated. Due to the large number of contributors, the length of the papers had to be restricted. This volume is again devoted to recent significant results obtained in approximation theory, harmonic analysis, functional analysis, and operator theory. The papers solicited include in addition survey articles that not only describe fundamental advances in their subfields, but many also emphasize basic interconnections between the various research areas. They tend to reflect the range of interests of the organizers and of their immediate colleagues and collaborators. The papers have been grouped according to subject matter into ten chapters. Chap­ ter I, on operator theory, is devoted to certain classes of operators such as contraction, hyponormal, and accretive operators, as well as to suboperators and semi groups of operators. Chapter II, on functional analysis, contains papers on function spaces, algebras, ideals, and generalized functions. Chapter III, on abstract approximation, is concerned with the comparison of approximation processes, the gliding hump method, certain inter­ polation spaces, and n-widths.