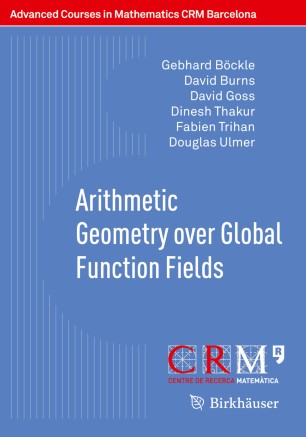 This volume collects the texts of five courses given in the Arithmetic Geometry Research Programme 2009–2010 at the CRM Barcelona. All of them deal with characteristic p global fields; the common theme around which they are centered is the arithmetic of L-functions (and other special functions), investigated in various aspects. Three courses examine some of the most important recent ideas in the positive characteristic theory discovered by Goss (a field in tumultuous development, which is seeing a number of spectacular advances): they cover respectively crystals over function fields (with a number of applications to L-functions of t-motives), gamma and zeta functions in characteristic p, and the binomial theorem. The other two are focused on topics closer to the classical theory of abelian varieties over number fields: they give respectively a thorough introduction to the arithmetic of Jacobians over function fields (including the current status of the BSD conjecture and its geometric analogues, and the construction of Mordell–Weil groups of high rank) and a state of the art survey of Geometric Iwasawa Theory explaining the recent proofs of various versions of the Main Conjecture, in the commutative and non-commutative settings.