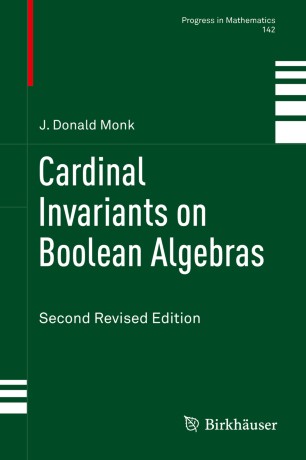 Part of the Progress in Mathematics book series (PM, volume 142)

This book is concerned with cardinal number valued functions defined for any Boolean algebra. Examples of such functions are independence, which assigns to each Boolean algebra the supremum of the cardinalities of its free subalgebras, and cellularity, which gives the supremum of cardinalities of sets of pairwise disjoint elements. Twenty-one such functions are studied in detail, and many more in passing. The questions considered are the behaviour of these functions under algebraic operations such as products, free products, ultraproducts, and their relationships to one another.

Assuming familiarity with only the basics of Boolean algebras and set theory, through simple infinite combinatorics and forcing, the book reviews current knowledge about these functions, giving complete proofs for most facts. A special feature of the book is the attention given to open problems, of which 185 are formulated.

Based on Cardinal Functions on Boolean Algebras (1990) and Cardinal Invariants on Boolean Algebras (1996) by the same author, the present work is much larger than either of these. It contains solutions to many of the open problems of the earlier volumes. Among the new topics are continuum cardinals on Boolean algebras, with a lengthy treatment of the reaping number. Diagrams at the end of the book summarize the relationships between the functions for many important classes of Boolean algebras, including interval algebras, tree algebras and superatomic algebras.

“This book surveys the theory of cardinal-valued functions for Boolean algebras … . The book provides an invaluable resource for anyone working in Boolean algebras and can also be interesting for people working in set-theoretic topology or combinatorial set theory.” (Juan Carlos Martínez, Mathematical Reviews, April, 2015)