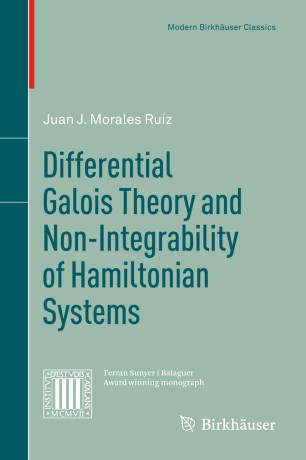 The book is based on the original joint research of the author with J.M. Peris, J.P. Ramis and C. Simó, but an effort was made to present these achievements in their logical order rather than their historical one. The necessary background on differential Galois theory and Hamiltonian systems is included, and several new problems and conjectures which open new lines of research are proposed.

The book is an excellent introduction to non-integrability methods in Hamiltonian mechanics and brings the reader to the forefront of research in the area. The inclusion of a large number of worked-out examples, many of wide applied interest, is commendable. There are many historical references, and an extensive bibliography.
(Mathematical Reviews)

For readers already prepared in the two prerequisite subjects [differential Galois theory and Hamiltonian dynamical systems], the author has provided a logically accessible account of a remarkable interaction between differential algebra and dynamics.
(Zentralblatt MATH)